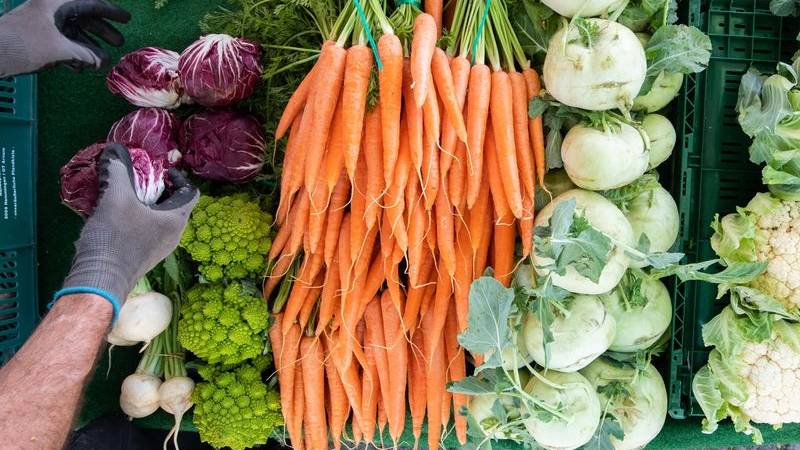 Farmers are feeling the pinch of the current closure of restaurants, canteens and catering services. For example, producer prices for meat are currently falling.

The dairy market is divided into two parts: the dairies serving the food retail trade are doing well; those who deliver to large consumers are under pressure. The price distortions suffered by farmers do not apply to private individuals: consumer prices for fresh food are almost ten percent higher this April than in the previous year, says Thomas Els, market expert at the Agricultural Market Information Society (AMI) in Bonn. This is not only due to Corona: global demand plays a role in pork, while apples have a scarcer harvest in the past year. An overview:

MILCH: The division of the dairy market is extreme, says Frank Feuerriegel, Managing Director of the Lower Saxony Dairy Association. For dairies, which concentrate on supplying large consumers, sales have broken from one day to the next. Farmers who have contracts with these dairies also suffered as a result: on average, the payment prices in Lower Saxony for the litre of milk in March were between 32 and 34 cents.

“Some dairies have already announced that they will reduce the payout price if the situation does not improve,” says Feuerriegel. The crisis is hitting dairy farmers at a difficult time, because after two years of drought, farms are not doing well anyway. Because of the poor harvest, the farms had to buy food. In the northwest there is also a field mouse plague. Dairies responded by storing products such as butter or milk powder first and selling them later.

RINDFLEISCH: The drought of the past two years has had an impact on producer prices for cattle farmers for some time, explains AMI meat market expert Mechthild Cloppenburg from Berlin. Due to the lack of feed, many farmers have had to reduce their livestock. In the Corona crisis, the lack of sales for restaurants and canteens once again prevailed. “The demand is so mau, there’s nothing going on,” Cloppenburg said. The important Easter business and celebrations such as Communion or Confirmation were missing – so also the demand for beef fillet or roast beef.

PIGS: Pig fatteners are also feeling a significant drop in the slaughter price, which currently stands at 1.75 euros per kilo. Just a few months ago, it was over 2 euros, says Cloppenburg. The corona-related decline in Asia’s business is also having an effect, especially with China. High demand for meat from China had brought high producer prices to pig fatteners last year. But sales there have fallen because of the Corona outbreak. In the meantime, however, the China business is slowly starting again, said Ulrich Pohlschneider of the German Pig Farmers Association (ISN) in Damme near Vechta. Farmers noticed that because of Corona, the flow of goods had also stalled within Europe, especially to Italy.

WILDBRET: Wild traders are hardly taking any more game-watering food nationwide because the cold stores are full. The reason: The restaurants as main customers are currently cancelled. Prices for game have fallen to between half and a third of the usual level, according to one trader. For each kilogram of deer or deer, a hunter receives one instead of three euros, for wild boar only 50 cents.

GEMÜSE: In April, the price premium for vegetables was 27 percent compared to the same month last year, says AMI expert Els. This is mainly due to cabbage vegetables such as broccoli or cauliflower, which is harvested in France and Spain at this time of year. Behind the price increase could be a shortage of harvesters because of travel restrictions.