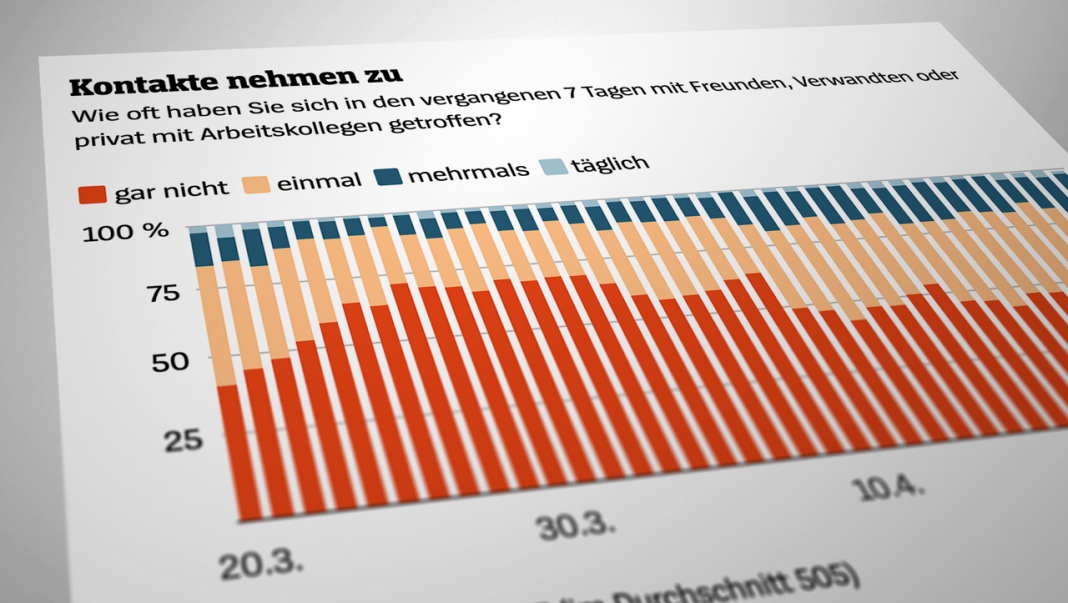 First came uncertainty and fear, then the initial restrictions and bans on contact because of the Corona pandemic. At most, people were allowed to travel in pairs. The only exception is families and people living together in a household.

Representative survey data from the University of Mannheim now show how consistently the Germans have been doing social distancing – and that they are now meeting friends and acquaintances more often. This is despite the fact that the Federal Government is still clearly positioning itself: “Minimize your contacts to what is absolutely necessary. Do not travel – neither abroad nor domestically, even to relatives. For the time being, these rules will apply until 3 May,” according to the rules, which are available on the Federal Government’s website.

At the end of March, only 30 percent of respondents said they had met with friends or acquaintances at least once in the past seven days. In the meantime, this figure has risen to around 60 percent – see chart above.

“Since Easter week, the number of social encounters in leisure time has been increasing again,” says Annelies Blom’s team. This trend is evident in all the population groups considered.

The development also fits well with nationwide mobile phone data, which allows conclusions to be drawn about people’s mobility. If a mobile phone leaves a cell and later does not change the new position for at least 15 minutes, this counts as a movement. How mobile phone owners move, whether on foot, by train or by car, doesn’t matter.

The following chart shows the evolution of the movement compared to the average numbers from March 2019. The data are from Telefinica, analysed by teralytics and researchers from Humboldt University Berlin. The curve curve is similar to the contacts.

Most people seem to exercise a certain caution when starting up their social life. According to the Mannheim survey data, the proportion of people who have met with friends, friends or acquaintances more than once has increased only minimally. This is shown by the blue bars in the following chart. For comparison, you can see values from 8 March in the column on the far left – well before the precautionary measures begin.

The data on contact behaviour comes from the Mannheim Corona Study, in which sociologists interview around 500 participants of a representative panel of 4000 people every day since 20 March.

Another result of the surveys: People who feel strongly threatened by the novel coronavirus have fewer private encounters.

Acceptance of the measures against the pandemic is high even after several weeks of restrictions. However, there has been a significant decrease in the issue of the closure of public facilities. The current discussions on the start of school operations are also likely to play a role here.

The economic consequences of the fight against Corona are driving more and more people around. However, the majority of respondents still rate the social benefits of the restrictions more than the economic damage.

But the share of critics is steadily increasing. While on March 20, 27 percent considered the economic consequences to be more severe, the figure is now 37 percent. Here, the mood could actually tip over in the coming weeks.