World War II – 75 years of the end of the war: Vladimir Putin, Joseph Stalin and our Mother of God 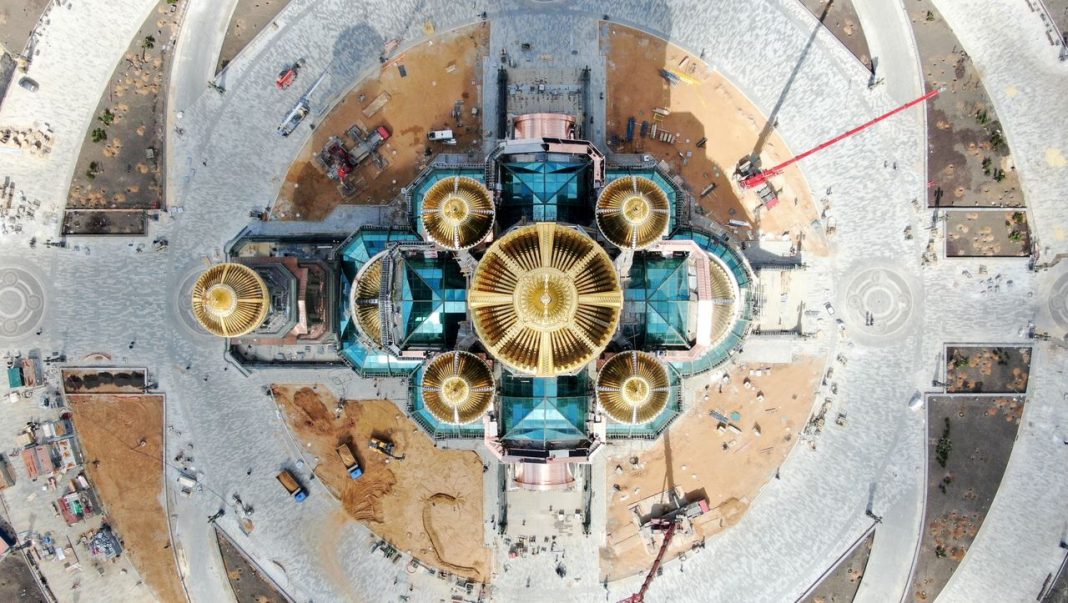 In the west of Moscow is the Russian army amusement park – a large area where you can watch tanks, play paintball or practice dismantling Kalashnikovs. The biggest attraction, however, is yet to be opened: it is the new cathedral of the Russian Armed Forces – a building dedicated to Christ’s Resurrection and victory in 1945.

Their inauguration, scheduled for this week, had to be postponed because of the coronavirus, as well as the parade in Red Square. All the greater is the controversy that the Church has already caused, after it was announced that President Vladimir Putin and Joseph Stalin appeared on wall mosaics.

The idea for the construction came from Defense Minister Sergei Shoygu, who laid the foundation stone with Putin in 2018. The unusual design also partly goes back to him. The church is decorated from the outside in military green grey, the ceiling vaults are glazed and decorated with military orders.

The Soviet star, hammer and sickle therefore shine next to the large face of Christ in the main dome. In the cast-iron steps, Shojgu melted German loot weapons to shout “about the weapons of the defeated enemy.”

The church is officially financed by donations, in fact also from state funds and state armaments companies. Putin himself donated the icon – a picture of Christ. It is the main icon of the Russian armed forces, and has been exhibited at many army bases at home and abroad.

The wall mosaics, as the priest Leonid Kalinin, who is responsible for the artistic direction, explains, follow a guiding idea: “That God is present in all the victories of Russia since Russia existed.” Thus one sees Our Lady, protecting Moscow from the Germans in 1941, intervening in Stalingrad in 1942, and in 1943 in the tank battle at Kursk. The depiction leads through the military operations in Afghanistan, Korea, Vietnam and Syria to the present day, reveals the mosaic artist Vasiliy Nesterenko – “and always in church language – one cannot depict everything in the church.”

That is the point: what can be depicted? Two mosaics made for the Western Wall show Vladimir Putin and the dictator Josef Stalin, even under the gracious gaze of the Madonna. Stalin appears as a political banner carrying cheering crowds at the 1945 victory ceremony in front of St. Basil’s Cathedral. Opposite, Putin celebrates the annexation of Crimea to Russia in 2014, among cheerful women and masked soldiers. At his side is Russia’s political elite: Shoygu, the heads of the FSB intelligence service, the army and security council, but also Foreign Minister Sergei Lavrov and the head of the upper house. So you could see it in photos that were leaked from his workshop to Nesterenko’s anger.

The outrage was great. The mosaic has been withdrawn. Putin made a gentle rebuke from his spokesman: “At some point grateful descendants will acknowledge our merits, but now it is too early to do so.” Politicians are now reportedly being replaced by monks celebrating the annexation of Crimea.

And Stalin, too, is removed, in Kalinin’s words. His illustration is, theologically speaking, the far greater taboo break. Mosaic author Nesterenko says that depicting Stalin does not mean to worship him: “When you depict the sacrament, Judas can also be seen.” But, of course, Stalin did not come across the mosaic as a traitor, but as a victorious commander-in-chief. And the army leadership adores him quite openly. “Why should we be ashamed of him?” Asked Deputy Defense Minister Andrei Kartapolov this week in Komsomolskaya Pravda. Stalin had “gone through all the hardships of the war himself, responsible for the most important decisions.”

But for all the sympathies that Stalin enjoys in the people, in the army and even among some priests – his representation in the church room was until now taboo for the church leadership. “There is really only one way to depict him in a church: as a sinner in hell,” says the liberal theologian Sergei Tschapnin. Unfortunately, however, the Russian Church has long understood itself as the church of the resurrected Russian empire – and in this logic Stalin and Putin are as indispensable as Nicholas II, the last tsar: “They stand for the continuity of the empire.”

The army and church argued that it was quite common to build churches in memory of victories – for example, the victory over Napoleon. “But in the past, the memory was directed at the fallen. Now it is focused on the military triumph itself. It would be more honest to consecrate this church to the god of war Mars,” says Tschapnin.

Father Andrey Kurayev, author of a much-used religious school book and now a sharp critic of the church leadership, calls the new church building “a symbol of our epoch and testimony of a new religion.” By this he means: Russia’s new state ideology, a “civil religion” in which Putin is used as the legacy of victory in the Great Patriotic War. Christ’s Resurrection and Russia’s Resurrection are not one or the same in the end.