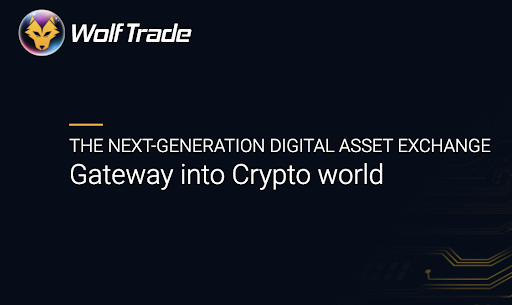 A Singapore-based Crypto Exchange – Wolftrade has announced their plan to launch their own NFT market and staking functions in the near future according to the roadmap. Wolftrade is the new and potential crypto exchange to be aware of in 2021 since it has hit various milestones by its special functions in security and technology.

According to the statement in their roadmap, Wolftrade plans to launch a marketplace for non-fungible tokens (NFTs) as the emerging exchange for trading crypto assets joins the boom in digital collectibles. The exchange, which was developed based on the TRC-20, announced that with the NFT market, it would let users create, buy or sell the increasingly popular digital tokens that represent artworks or other collectibles.

The development team said it wanted to “allow everyone to benefit from their creative spark” and to help turn the “creator economy” into a central driver of the real economy. If successful, Wolftrade’s new marketplace may create a lucrative new revenue stream, given the ongoing frenzy for NFTs.

Wolftrade said users would not have to pay any additional fees for creating, listing, or promoting NFTs, beyond the “gas” fee needed to register an NFT on the blockchain. While the initial launch will initially support minting on the TRON blockchain, the company will support other blockchains “soon after”, the representative added.

In addition, Wolftrade also publishes their staking, lists EX platform, starts trading fee mining and revenue distribution as well develops a mobile app for users that can be accessible from everywhere. All these functions are planned to be established in Q1/2022 and expect to create a commotion in the Cryptocurrency industry field.

With those upcoming features, Wolftrade believes that it can fulfill the vision of benefiting users and becoming the new international financial ecosystem focusing on customer profits.

In Wolftrade, their simple, easy-to-use interface lets both beginners and pro-traders use the platform seamlessly without the need for technical support. Furthermore, experts partnered with their advisors not only promise to bring the best trading experience that allows crypto investors to utilize their assets but prove how blockchain impacts the future of our society, by using blockchain, any business improves its process to new heights.

Wolftrade can be considered as a blockbuster crypto exchange for the next few years with clear visions and exquisite missions. By investing in Wolftrade today could be an appropriate opportunity for everyone to earn profit as the main slogan of Wolf Trade Exchange – “TRADING WITH US, PROFIT FOR REAL”.

Wolftrade is a cryptocurrency exchange based in Singapore, launched in 2021. The platform is founded with the goal of giving people the tools they need to quickly and securely invest in cryptocurrency. Wolftrade reports in the statement its mission is to make cryptocurrency more accessible so that people from all walks of life can achieve financial freedom in a short appropriate time.

Wolftrade aims to be a next-generation cryptocurrency trading platform that utilizes and maximizes blockchain capability. Their goal is to become the new international financial ecosystem focusing on customer profits – one of the core values for Wolftrade development. The native token of Wolftrade is WTE and the total supply is 90,000,000 tokens.