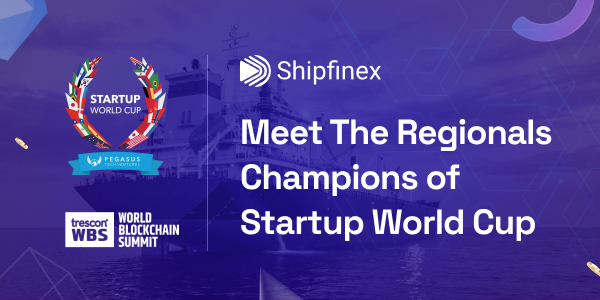 Dubai, UAE, The initialisation of growing use-cases of Web3 is indeed a fascinating journey to be a part of. Turning financial solutions to be more community-centric is what was missing in our traditional systems and industries.

To encounter these conventional systems in of the most fragmented and centralised sectors, ShipFinex is emerging out to revolutionise the trillion-dollar Maritime economy. Started with their launch in July, 2022, they have been able to steer the way to attract sizable traction and are on an eventful spree. Beginning by participating in community events from India Blockchain Week, Fintech Festival to making their presence at the world stage in Token 2049, Singapore; Fintech Blockchain Summit, Dubai and lastly leaving a big mark at the World Blockchain Summit, Dubai.

With the return of one of the oldest occurring Blockchain events in Dubai, it was time to kick start the search for a new season of Startup World Cup in association with Pegasus Tech Ventures as well.

The Startup World Cup is a world-renowned competition inviting regional winners from over 70+ countries to compete for a prestigious title of “Best Startup”. The regional chapter for the year 2023 finale started with a bang, showcasing 16 enterprising Startups from the field of Artificial Intelligence, IoT, Food Tech, Development Infrastructure Metaverse and Real-World Asset Tokenisation.

Over 16 projects shared the stage with ShipFinex and while all of them had an amazing concept, ShipFinex stood out with its vision of decentralising the Maritime economy and Shipping Finance, introducing Maritime Assets on-chain. Key components of this positioning were the vision to enable decentralisation in the Maritime sector and the infrastructure layer of real-world asset tokenisation ShipFinex is creating.

ShipFinex is creating a convergence between 2 trillion-dollar markets, bridging the two industries into a single solution through a multi-layer infrastructure setup, bringing tokenisation of Maritime assets to address the liquidity flow in the maritime economy, making shipping assets accessible for everyone through an exchange platform.

According to Vikas Pandey, COO & Co-Founder of ShipFinex

“The overwhelming response received from over 500 attendees as well as the organisers of the event motivated us even further in our mission. We are thrilled to have won the Regional Startup World Cup Pitch Competition and could not be more thankful for the support of Trescon and World Blockchain Summit to conduct this eventful night, bringing together the most sought-after Web3 and Tech community.”

Mr.Jagdish Pandya, Founder of  BlockOn Capital , who has incubated many  early-stage projects including ShipFinex  added

“ShipFinex is the kind of project that uncovers the true potential and purpose of Blockchain technology. In the midst of all the hype and assumptions, we need solutions like ShipFinex to create global impact through real-life use cases. I am excited to see  a potential unicorn in Shipfinex and be a part of their progress and entire journey.”

After winning the Regional Chapter in Dubai, ShipFinex Team will fly to San Francisco to participate in the Final Chapter of the Startup World Cup Pitch Competition for the mega prize of $1M and showcase how far along they can take the concept of real-world asset tokenisation and bridge the gap in Shipping Finance through their groundbreaking Web3 solution.