Reinvent Yourself Through Self-Discovery & Determination 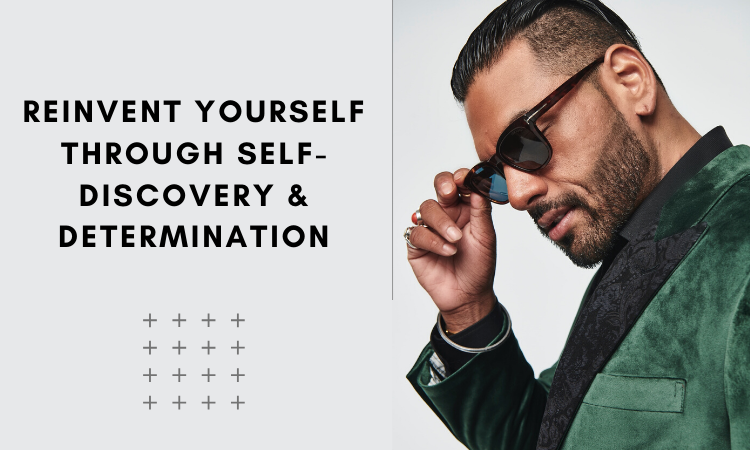 Reinvention.  What is it?  If you look in the dictionary, the word reinvention is defined as “the action or process through which something is changed so much that it appears to be entirely new.”   Serial entrepreneur and fitness expert, Jas Mathur, prides himself in being able to reinvent himself in his early twenties.  He is and has always been a successful businessman, however he could not say the same about his health.  Fortunately for him, in his early twenties, he realized that when it came to his health, he was bankrupt.

“If you do not create change, change will create you.” ~Unknown

Sometimes, to make ourselves truly change our lifestyle and habits, we have to confront and realize the need to change.  Why do I need to change? If you’re overweight or obese, losing weight can reduce your risk of some potentially serious health problems. For those who are trying to lose weight, sometimes they simply must ask the question: am I willing to go through the pain of change, the pain of training my body, in order to avoid the long term and much more deadly pain associated with staying unhealthy?

Jas Mathur is a textbook example of reinvention.  He made himself new.  He discovered the need to change through self-discovery and determination to be honest with himself.  From an early age, Jas was accomplished on shipping or, dominating a variety of industries even as a teenager. But he also developed some poor health habits early on, and ended up weighing over 450 pounds as an adult. With the 68 inch waist and needing to wear size 6 XL T-shirts, this marketing genius and emerging entrepreneur was on the fast track to an early death.

He needed to change.  Eventually, two circumstances motivated him to make significant and permanent change. First, he bought himself a sports car out of impulse, and when he tried to get into the car, he couldn’t fit into the seat. He needed to be a certain size to fit in his new car.  Can you imagine buying yourself a car and then realizing that you cannot even fit inside of it? Additionally, he needed a picture for an online profile for social media, but he was ashamed to show his picture to the girl he was interested in.

These needs, combined with several other factors, the motivated Jas to make significant changes in his health, and in his mindset. He needed to be healthy and fit in order to be truly successful.  Jas realized that without health, entrepreneurial success is not enough to live a long and prosperous life.  Jas wanted to be there for his friends and family, and he wanted to prove to himself that he could overcome any challenge and truly transform. He had learned how to dominate as an entrepreneur, but now he was ready to dominate the world of physical health.

Jas embraced the need to change.  At first, change seemed impossible.  However, just like his businesses, he implemented a plan and surrounded himself with the best team.  He connected with a trainer and found a way to lose 88 pounds in three months. Think about that for a moment. He lost more weight than most people lose in their lifetime in less than 90 days. He then went on to lose over 250 pounds, rendering him almost unrecognizable at first to his friends and family.

As a result of his new found knowledge and new experiences about health and fitness, Jas emerged himself in changing all aspects of his lifestyle and committed to do doing the same for others.   His health transformation opened social doors for him that he had previously only dreamed about. His health and fitness ideas and innovations quickly turned into another successful enterprise for Jas.  Fitness experts and celebrities started to pay attention to his methods and concepts, and he quickly built a lifestyle and an empire known as LIMITLESS.  LIMITLESS is a way of living.

Looking back, Jas did not avoid change and realized the need to take the first step to a new Jas.  He reinvented himself.