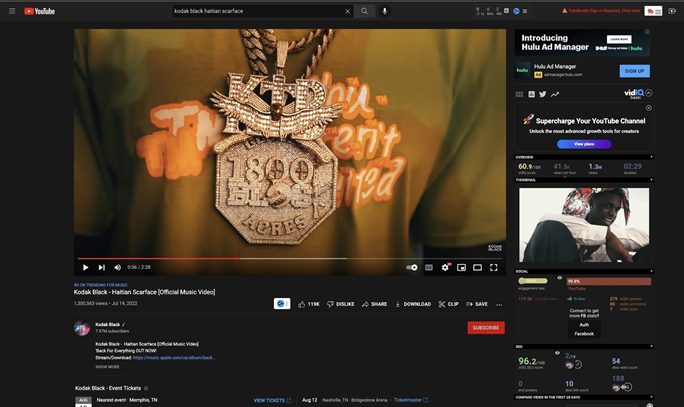 The artist shows an acute ability to convert raw emotion from recent life-changing events into hit songs and solidifies himself as a fashion icon with a story still unfolding, so fans should pay close attention.

Los Angeles (July 26, 2022) — This week, just days after his arrest, the Grammy-nominated rapper released a video for his new record “Haitian Scarface” while he addressed his run-in with the police. The police issued statements afterward, painting Kodak as a menacing criminal with a drug issue who needs to be locked up. The artist, who finds comfort in pushing boundaries, admits that he isn’t perfect and struggles with stress from his public-facing role. He has backed up his drug possession with a prescription due to a recent shooting where his leg was wounded and continues to find ways to give back to the community. As reported by TMZ,  Bill Kapri which is Kodak’s legal name purchased 100 air conditioning units for around $12,500 and donated them to residents at the Golden Acres Projects in his hometown.

As he embraces his media-prescribed role as the villain (The Haitian Scarface / Tony Montana) in the music video, Yak decided to send a bold message by wearing “You Aren’t Invited” on his chest, which visually complements his lyrics:

I bought a house on sunrise, so I can see the sunset
I’m the one they pointin’ fingers at every time they need a suspect”

by 20K Visuals and directed by Kodak Black, the music video has already accrued more than 4.2 million views (and counting) and holds the #1 Trending position on YouTube Music

Similar to Kodak Black, Hyde Park’s Creative Director, Hyde Park Jacob, has been accused of gang affiliation due to his work as a graffiti artist. These actions resulted in police targeting, multiple arrests, and confiscation of black book sketches and art materials.

With the world telling you who you should be, artists often get the short end of the stick as they help forge a path forward for everyone else to become who they want to be. With similar backgrounds, it’s no mystery why Kodak Black has taken a liking to the rebellious luxury streetwear brand.

You can find Hyde Park Goods online at www.hydeparkgoods.com or on social media via Instagram and Youtube.