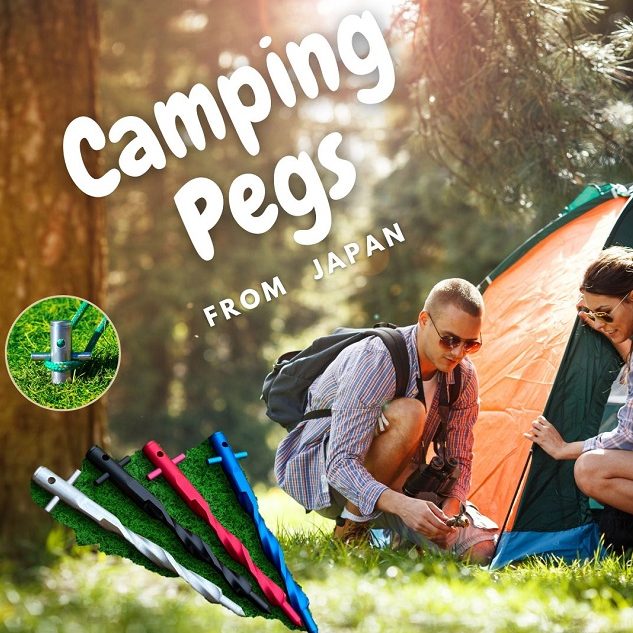 Hamamatsu, Japan, Presented as the ultimate camping stake following its Japanese crowdfunding success story, Flepeg has been launched today on Indiegogo, at https://igg.me/at/flepeg.

Flepeg solves a common problem that campers face all the time. When wanting to set up tent in an easy, fast, and stable way, campers use conventional tent stakes that typically require a strong effort to be hammered down and stay down. In windy weather, these stakes fail to be sufficiently resistant, and, in rainy weather, they fail to stick to the ground strongly enough when the dirt is too soft due to excessive rain.

Flepeg introduces an extremely simplified yet robust tent stake that changes the camping experience. With a unique spiral shape, Flepeg is six times stronger than conventional camping stakes, holding its ground regardless of what type of weather condition it is used in.

On the other hand, Flepeg can be simply hammered straight down vertically and effortlessly. “Any user of any age, strength level, or camping expertise can easily make use of Flepeg to robustly set up camp and enjoy the peace of mind of having it stable,” said Etsuo Ota, CEO of Taietu Iron Works Japan of the Flepeg campaign.

Flepeg’s spiral shape tightly entwines into the ground maximizing the grip and hold. It does not require the user to hit the peg diagonally like a normal peg, which involves a stronger effort while being less effective. Flepeg should be hammered down perpendicularly in just two or three effortless hits.

“Flepeg has been tested beyond any doubt. We tried to pull Flepeg out of the ground in a 45-degree angle and measure the resistance. We tested it on: soft ground, such as grass lawn, dry hard ground (soil), and wet hard ground after raining, and the results were staggering,” Etsuo Ota, CEO said. Flepeg displayed the strongest resistance when attempts were made to pull it out, showing the same result delivered by 30cm pegs even while being 10cm shorter. At the same time, removing it is just as easy: the user simply taps the horizontal bar on which the guy rope is fastened with a hammer to create a gap between the soil and the peg, and it can be effortlessly pull out vertically in one go.

Flepeg is made of Duralumin, which is an extremely strong alloy with feather-like weight, weighing only 56g, and it has a Cross and Hole Design, allowing the user to leverage its cross-shaped design or an embedded hole for one or two tensioners.

Flepeg is made in Hamamatsu, Japan’s primary manufacturing city, and it was successfully crowdfunded in Japan, on Makuake. The campaign on Indiegogo at
https://igg.me/at/flepeg is now seeking to raise $20,000 and offer exclusive access to Flepeg to Western backers in exchange for their support.