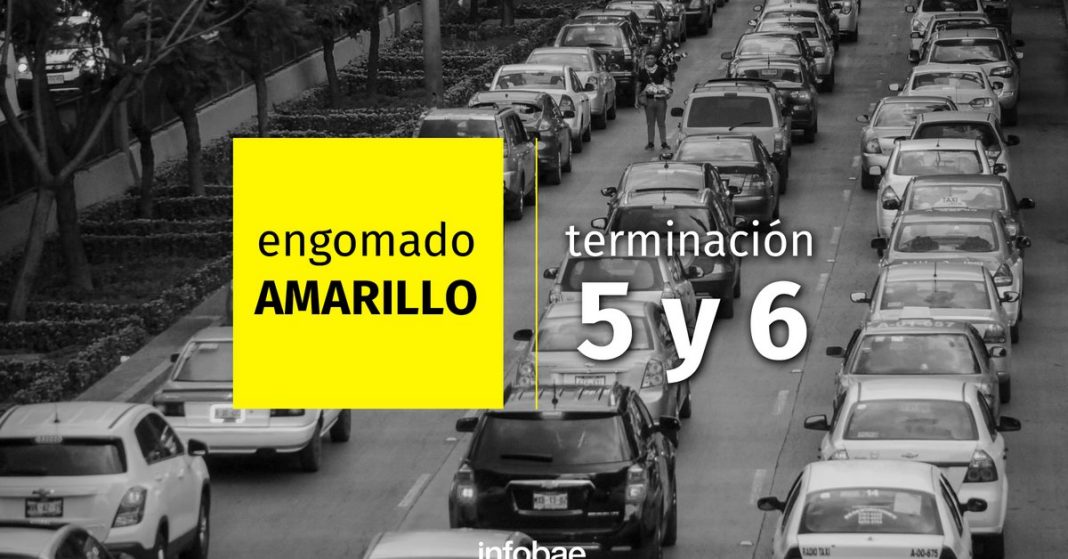 This Monday 19 October 2020 the program, hoy No Circula will maintain the restriction of transit for the cars with termination of plates 5 and 6, gummed yellow.

These restrictions come in effect from 05:00 hours of Monday, and until 22:00 hours in the Metropolitan Area of the Valley of Mexico, according to certifies the regulations endorsed by the Environmental Commission of the Megalopolis (Cmea).

Cars with hologram double zero, zero, electric and hybrid are not included in the program.

The mobile sources or vehicles registered abroad, or Federal Entities other than the Federal District, State of Mexico, and States that agreements of type approval for the verification process, vehicle, or who do not have the hologram check, or who carry a hologram that is not recognized by the Federal District limits their movement, a day during the week and every Saturday regardless of its final numerical digit, in a time of 05:00 to 22:00 hours; as well as, in a hours of morning from Monday to Friday from 05:00 to 11:00.

The Program hoy No Circula is not applicable for cars with disability license plates, emergency and funeral services, as well as for the public transport and the emergency services.

SUSPENSION OF THE PROGRAM

The environmental authority will issue the notice by which it suspended the application of this Program, in holidays, non-working, of mandatory rest or in seasons of vacation, taking into account that the air quality does not create a risk to the health of the population, which is determined by an analysis of the weather conditions, the monitoring of the quality of the air and of the concentration of emission of pollutants in the Federal District or Area Megalopolitana.

The vehicles and drivers of mobile sources or vehicles operating on the roadways and streets of the Federal District who are in violation of the measures envisaged in this Program, you will be creditors to the sanctions established in the Regulations of the Environmental Law of the Federal District in the Field of Vehicle emissions inspections; as well as, in the Regulation of Metropolitan Transit, or that will replace and other applicable provisions, without prejudice to that to be removed from circulation and returned to the tank vehicle, in which they should remain until they pay the corresponding fine and, in the case of the stopped vehicles during Contingency Environmental, will also have to wait for the end.

The motor should go to the verificentros in the City of Mexico from next month, according to the new calendar that marks the Environmental Commission of the Megalopolis (Cmea) after the closure of the establishments at the root of the pandemic of coronavirus, so the timing of verification is of the following form:

In the case of a gummed yellow (plate of 5 or 6), the Secretariat of Environment reported that it managed to successfully conclude the verification period, because the dates that he was entitled to carry out the process were the months of January and February.

Remember that the tentative date to open the centers of check is the 10 of August of this year.