eTrendyStock
HomeNewsErfurt: What the accused police officers say about the rape allegation
News
May 5, 2020

Erfurt: What the accused police officers say about the rape allegation 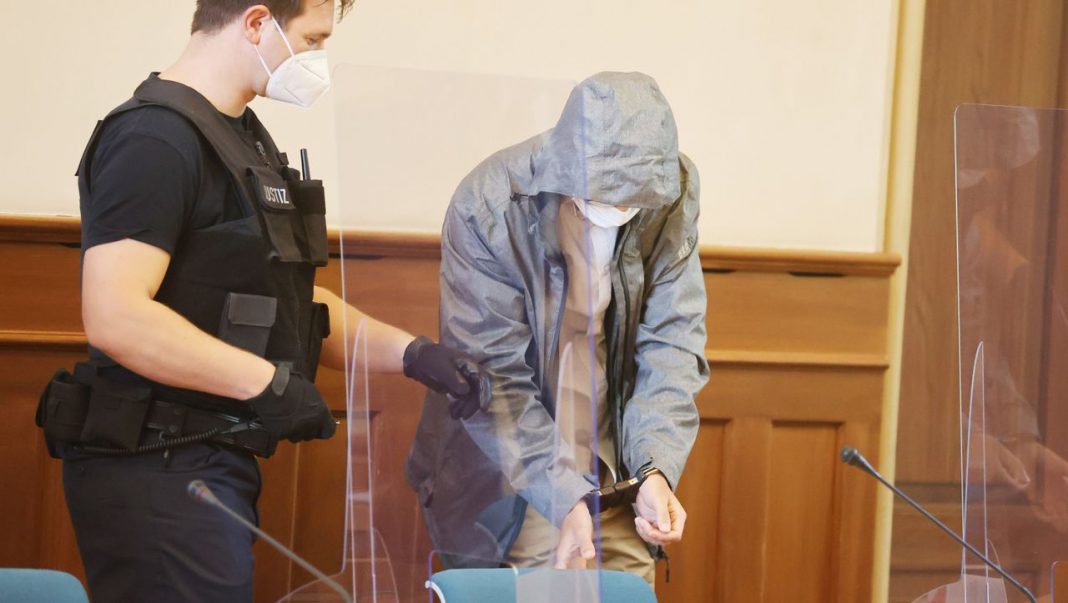 Tied to their hands and feet, the two police officers are led into the jury room in civilian clothes. Their discomfort is to be noted to them. Officials in the dock are rare, not only here in the district court of Erfurt. In this case, the accusation is particularly serious: the men, aged 23 and 28, allegedly raped a woman in their apartment on duty – in uniform, their weapons with them.

They have been in custody for seven months. For police officers, this can be an imposition, in prison they do not have an easy position in the prisoner hierarchy. Thus, at the beginning of the main hearing, the defender of one officer asks that the report refrain from mentioning the names of the accused in order not to put them in danger.

It is about 28 September last year, the last shift for the 28-year-old. He wanted to go to the university of applied sciences and was allowed to choose three colleagues for his last assignment, with whom he wanted to serve again as a patrol guide. Four of them were officers from the Gotha Streife police inspectorate through Arnstadt, about 30 kilometres from Gotha.

They notice a couple, the man visibly wears far-right tattoos, the license plate of the car is Polish. Officials see some “potential for control.” The four police officers check the two, asking the man to stick the anti-constitutional tattoos off; the woman identifies herself with a fake passport. Six of them go to the police station for clarification.

A police officer describes alleged approaches in the back seat

The prosecutor presents in court what happened afterwards: Three of the police officers accompany the couple to their apartment in Marlishausen, a district of Arnstadt. They hope to find documents there that indicate the true identity of the native Polish.

In the apartment, the woman is later told, the two defendants allegedly raped her unprotected vaginally. The so-called paddock, the belt with the weapons, they are said to have deposited beforehand.

The prosecutor speaks of sexual abuse of a “government-held person” entrusted to the police officers. She accuses the men, among other things, of rape in a particularly serious case.

In court, the two defendants stick to what they have stated in interrogations so far: Yes, they had sexual intercourse with the woman – but by mutual consent. The woman had already made attempts to approach her while driving in the police van. The 23-year-old, who was sitting in the back seat between the woman and her partner, is said to have put her hand on her leg several times. He speaks of “subliminal” touches.

In Marlishausen, a third colleague and the woman’s partner allegedly waited and smoked on the street. In the apartment, the woman, who spoke poor German, had signalled to the two officers that they should look for possible papers themselves. The woman was first in the bathroom.

During the search, the woman showed officers a blond wig and photos on her mobile phone showing her wearing only underwear or bikinifor the wig. In a chest one found a folder, in it a rental contract or a work certificate – also on it the fake name. “It doesn’t help us,” the 23-year-old said, scrolling around the folder. In the meantime, the woman first pulled on the curtains and then undressed completely. “I was in shock for a short time,” the official recalls. She was close to him, grabbed him in the crotch, massaged his limb. He had put down his paddock and opened his trousers. “She knelt in front of me and pulled my underpants down.”

According to the two defendants, the woman waved to the older officers. “I was frozen, I was completely shocked,” he told the court. “From then on, everything went like in the movie.” The 28-year-old says three of them had vaginal and oral intercourse on the bed. “Then she looked at us, grabbed my arm, held her index finger to her mouth and said, ‘Secret!’,” says the 23-year-old.

Both stress that the woman never stated that she had no interest in these sexual acts. On the contrary: “It started from her!”

The woman advertised as a hostess on the internet

They then left the apartment together and went to the ilmenau office for a recognition investigation. During this trip, too, the woman smiled and appeared relaxed. The woman was taken into custody and the next day she filed a rape complaint.

The 2nd Trial Chamber of the Erfurt Regional Court asks detailed questions about the sexual and intimate life of the two police officers. Both are in a solid relationship, one even engaged. Their partners have forgiven them, they say.

The 23-year-old says he couldn’t understand how he had been manipulated by the woman’s “contact.” “I think it’s a serious mistake.” He only found out afterwards that the woman offered herself as a hostess on the Internet from his lawyer Matthias Fertig.

“I had a huge panic”

The questioning of the woman in court will be as important evidence as footage taken by the 28-year-old with his mobile phone at the crucial moments and from several perspectives. In court, he is ashamed of it. He removed the SIM card shortly after the incident and threw the phone into a creek. “I had a huge panic that it would come out that we had sex on duty.” The chairman, Judge Detlef Hampel, wants to know whether this is a criminal offence in his view. “What does a criminal offence mean? I was afraid that I wouldn’t be able to start my studies.”

According to Hannes Grünseisen, spokesman for the Erfurt Public Prosecutor’s Office, it is still unclear whether the recordings can be recovered and used for the taking of evidence.

After the service on that 28th September there was still a “celebration of my farewell”, says the older defendant. He then sent his colleague a WhatsApp, meaning: “Thank you for a memorable last shift.” That sounds little like remorse, Judge Hampel notes.

If the allegations are confirmed at the trial, the police officers face a custodial sentence of three months to five years. Those convicted of such a crime cannot, as a rule, remain a police officer. But could he do it if he demonstrably did not force sexual intercourse? Would the police not have shaken confidence in the rule of law in this case too?

The two defendants are currently suspended from duty. It could have been the last shift for both, regardless of the verdict.