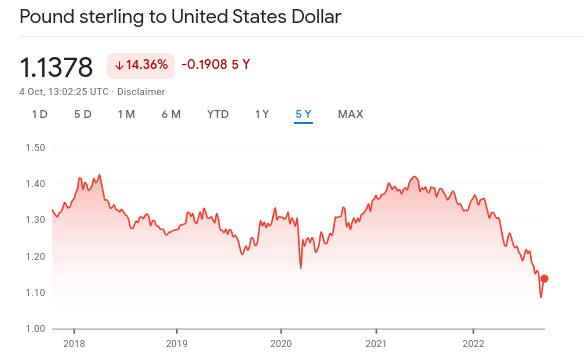 The value of the British Pound has been steadily declining ever since the Brexit vote in June 2016. The Pound is currently at its lowest point since 1985 and appears to be falling even lower than many analysts predicted just a few months ago. However, this drop in value has led to an excellent buying opportunity for Britons who have not yet bought any Bitcoin.

While some people see Bitcoin as too volatile or risky to invest in, others look at this broken currency market as an opportunity to scoop up cryptocurrencies like Bitcoin and Ethereum while they’re relatively cheap.

As the value of the British Pound goes lower, Bitcoin becomes more attractive to Britons

Bitcoin is a great way to diversify your portfolio without being affected by Brexit. Bitcoin is not correlated with the British Pound and will only benefit from Brexit-related economic uncertainty. Over time and with increased adoption, this could lead to Bitcoin becoming a global currency that is not affected by any country’s political affairs or economic policies.

Moreover, it means that if you live in Britain, buying bitcoin now as a hedge against inflation and economic uncertainty makes sense!

Bitcoin is also a much safer investment than traditional currencies, as it has no physical form and cannot be stolen or counterfeited. In addition, it is not affected by political upheaval or economic uncertainty, making it a great hedge against these factors.

The Pound has been steadily declining since the Brexit vote in June 2016. It hit its lowest value in 37 years versus the dollar amid concerns over a possible recession. Hitting such a low exchange value may not seem like  a big ordeal. However, it severely weakens the UK economy, which is already brittle since Brexit.

Although that dip has been overcome, for now, the situation remains uneasy. A temporary market reprieve does not address the bigger issues at hand. The UK is at a crossroads and something will need to change. Unfortunately, no one knows what that change will be. Start making personal financial changes in your life by looking at Bitcoin today.

If you have not bought any Bitcoin yet, it is time to do so. The value of the British Pound will continue to fall and will most likely hit a new low in the next few days or weeks. If you wait longer than that, the price will be even higher, and you will lose more money in purchasing power due to inflation.

Bitcoin is the safest way for Britons who want to protect their wealth from all kinds of threats: political instability, economic instability, financial crises, and other factors which influence an unstable economy like Brexit.

The price of Bitcoin has fluctuated significantly over the last few months, but many investors are willing to wait for it to go back up again. That is because they see Bitcoin as an opportunity to make real money in the future instead of buying now and selling quickly when it goes down again.

It would be best if you thought about this before you start trading with Bitcoins. If you intend to buy and sell quickly without overthinking it, you should choose another way of making money (like gambling). However, if you want to make serious amounts of money from investing in cryptocurrencies, then there’s no reason why this shouldn’t be possible with Bitcoin too!

Britons should consider buying Bitcoin, which is so inexpensive in their local currency!

The British Pound continues to devalue due to macroeconomic events. Those make the cost of Bitcoin in GBP relatively cheap, and Britons should take advantage of this opportunity.

Bitcoin is an excellent long-term investment as it has historically been one of the best-performing assets, with spectacular gains in just a few years. It is also a safe haven asset during economic turmoil, exposing you to an asset class that will always retain value (unlike commodity currencies). In addition, Bitcoin offers a high degree of privacy; unlike cash or gold—your wealth can’t be stolen by thieves who break into your home and find your stash!

Finally, Bitcoin is digital gold; its supply rate is halved every four years until there are 21 million coins mined in total (in 2140).

If you haven’t purchased any Bitcoin yet, now is the time to do so! The price of Bitcoin has been steadily rising since it was created in 2009, showing no signs of slowing down. One cannot say the same for the British Pound.

As we’ve seen with other currencies throughout history (like the US dollar), we could see Bitcoin go through another “Dollarization” by having more people use it for their daily transactions over traditional forms of money like pounds sterling or euros. At best, that future is still years away, but it remains something to consider.

If you are ready to start stacking up on Bitcoin, check out the many trading platforms to do so, including CoinCorner,Coinbase, and Binance.