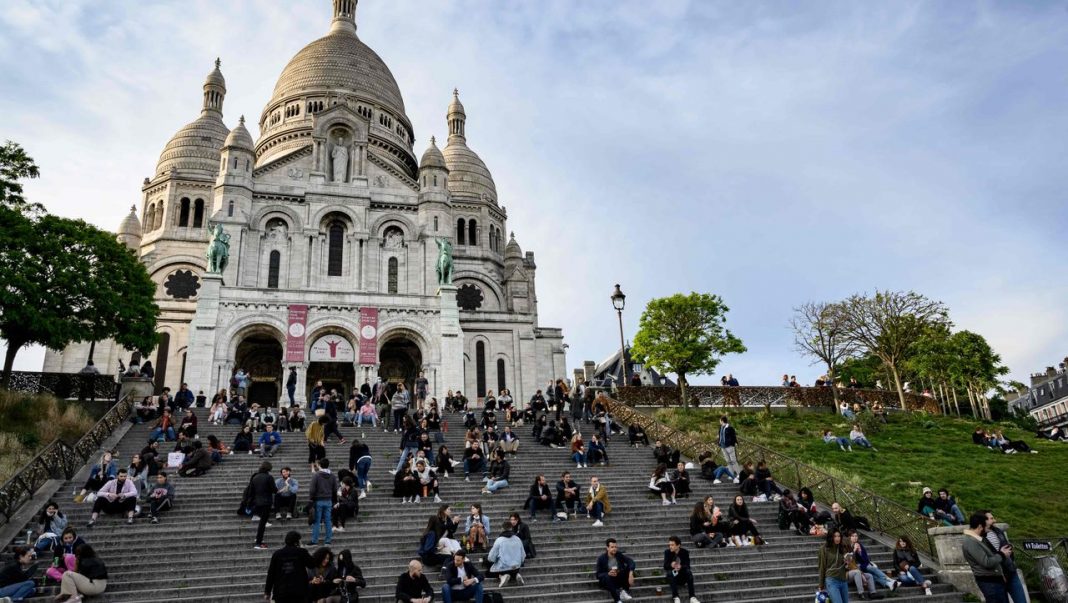 In Paris, it smells like car exhaustfumes again. And for many Parisians, that’s a good sign. The exit from the nearly two-month lockdown has begun since Monday. Citizens are allowed to move within a radius of 100 kilometres – without having to present a passport, as has been the current.

For the first time in weeks, the markets have reopened, albeit with plastic tarpaulins in front of the stalls. There is not as much going on at the market on Place de Fetes in the north-east of the city as usual. At the Priolet family stand, which offers poultry, the boss moans: “We lost three-quarters of our sales in the curfew.” She is relieved to be back on the ground.

“The virus has decreased, but still there”

The tourist attractions from the Louvre to the square in front of the sacré-Coeur church on Montmartre are completely empty. There is more going on wherever you haven’t been able to shop for weeks. At the Office Depot office shop on Rue Belleville, at the Darty technology chain on Place de la République and in clothing stores such as Zara.

After all, almost all wear masks. The situation is different on the Saint-Martin canal, the party mile of youth. Already at noon the young people meet here and sit close to close without mask. Exit rules stipulate that a maximum of ten people can meet on the street, mask is only mandatory on public transport.

The lockdown was much stricter in France than in Germany, for example. President Emmanuel Macron promoted the bans by talking about war. Most citizens complied with the guidelines.

But now videos of parties in backyards are popping up on Facebook. Police were forced to disband a group of hundreds of youths on the Saint-Martin Canal on Monday. Since then, alcohol has been banned there and on the banks of the Seine.

“The success of the exit depends on the consideration of each individual,” says Interior Minister Christophe Castaner. Social distance must continue to be respected. Macron appeals via Twitter: “The virus has receded, but still there.” In the Elysée, one is clearly afraid of a second wave.

Geographer Lise Bourdeau-Lepage of the Research Institute CNRS, who has written a study on the curfew, explains of the crowds: “It is possible that these images are a reaction to the invocation of fear and security.” People wanted to get back to their normal lives as soon as possible.

In Paris, too, exits can hardly be carried out in an orderly manner. Most of the sellers come from the banlieue, the social hotspots in the north of the city. Cashier Nicole at the Franprix supermarket on Rue Belleville says: “Line 13 was totally crammed.” It had to take detours because all interchanges such as Place Clichy and République are closed.

Also in the RER B, which comes from the north of Paris, the rush was great, while loudspeakers were called to keep a metre apart. The transport companies SNCF and RATP said: “The situation was mostly calm.”

With a few exceptions, the metros are not full, and traffic jams are not yet very busy. Many schools are still closed. There is a great fear of returning to schools, and teachers’ unions are protesting for health reasons.

First, the preschools and primary schools – not the exam years as in Germany – were opened so that parents could work again. A maximum of ten children are to be entered in the classes. Priority is given to children from a socially difficult environment, families in which both parents work, are salespeople, teachers or nurses. Of the 6.7 million children aged up to ten, only around 1.5 million are expected to go to school.

The older children should not return to school until later, at the beginning of June or perhaps not at all before the summer. That will be decided at the end of May. Returning to school after the lockdown feels a bit like a trial run for the fall. Education Minister Jean-Michel Blanquer said: “Every child should at least come to school again before the end of May.” Everyday life in France is far from over.