eTrendyStock
HomeNewsCorona crisis and aviation: What the empty sky reveals about the economy
News
May 6, 2020

Corona crisis and aviation: What the empty sky reveals about the economy 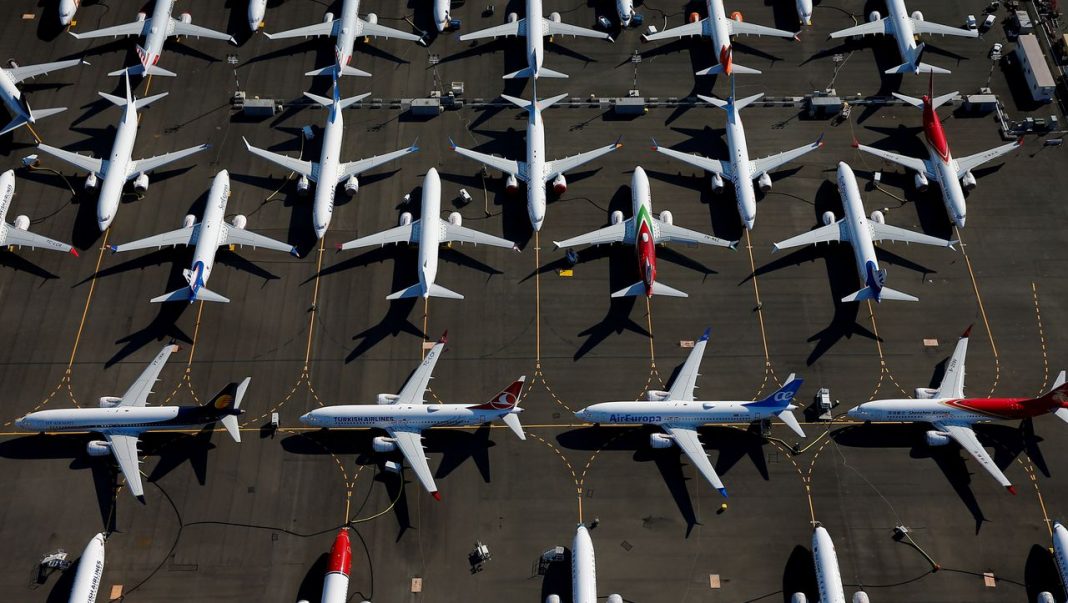 It wasn’t long ago that Tobias Preis had planned something. His plan: To fly less in the future, because of the climate, his wife had admonished him. “That was my intention for 2020,” says the German-born expert in behavioural sciences and finance, who conducts research at the University of Warwick and the Alan Turing Institute in London. So he was a lot on the train last time.

But now, as Price says, this is no longer the case. Because of the Corona crisis, he stays at home.

In fact, the scientist could no longer fly. Because of the pandemic, there are hardly any passenger jets left. According to statistics from the European Organisation for the Safety of Air Navigation (Eurocontrol), air traffic in its 41 Member States fell by around 90 percent last month compared to the previous year. While there were just under 31,700 flights over Europe on 18 April 2019, there were less than 2300 on the same day this year.

Together with two colleagues, Price looked at the flight statistics from the time when everything seemed fine in the sky. International aviation has rushed from growth target to growth target. Climate activists alone were annoyed and pointed out the particularly harmful influence of jet exhaust gases, which are ejected high in the atmosphere. Especially since the industry is not covered by the international agreements on climate protection.

The economists analyzed data from 67 million flights between July 2016 and December 2018. Their goal: they wanted to use flight movements as a real-time indicator of how the aviation industry is doing, thereby improving economic forecasts. In the trade magazine “Scientific Reports” they now report that they have succeeded from their point of view.

The team had specifically looked at the UK and the US. According to the researchers, the aviation sector accounts for more than three percent of total economic output. In Germany, for comparison, the figure is less than one percent. “Economic data from the aviation sector is usually published with a delay of up to three months,” says Preis. Especially in times of crisis, this is a problem, for example for politics: “You don’t drive on sight, you drive with data from the past.” However, when, for example, the Corona Crisis deals with the issue of state aid to the aviation industry, up-to-date information is essential as a basis for decision-making.

However, the ADS-B flight safety system could provide decision-makers with much fresher data. The technology works like this: A transmitter in the aircraft continuously emits information such as position, flight number, aircraft type and other. The signals are received by stations on the ground and satellites. Flight controllers know much better, and apps like Flightradar24 also use the information. All commercial aircraft in Europe and the US now have to use the system.

The researchers work with this data and reconstructed the respective flight routes from 25 billion individual position messages. The changes over time were related to the reported economic data of the aviation industry. In doing so, they were able to show that the flight data actually represent very well how the industry is doing at the same time. Quickly available information on the location of aircraft could be particularly helpful in improving conjuction estimates during economic crises, Price said. “The crisis we are currently tackling has underlined the crucial need for rapid indicators for good decision-making.”

The industry is particularly troubled

Jens Boysen-Hogrefe of the Kiel Institute for the World Economy, who was not involved in the study, sees this in principle. Asked by SPIEGEL for an assessment, he praises the work as “an interesting contribution to the currently well-received literature on the use of new technical possibilities for real-time recording of economic activity in the economic forecast”.

In fact, economists are looking for data in many areas that can help them feel the pulse of the economy. Declining electricity consumption in factories, for example, can provide timely indications of a slowdown in the economy. Toll data in Germany also show quickly when truck traffic slows down, which would also be a crisis signal.

What is difficult, however, is that the real-time indicator only looks at a tiny fraction of the total economic life. And this is also the problem with the current aviation study, says Boysen-Hogrefe: “To assess the current crisis consequences for the economy, the benefits of the empirical study are limited.” Finally, only one sector of the economy is considered. And this, according to the researcher, is also “disproportionately and to a historically not comparable extent affected by the crisis.”

A look at the company’s news of the past few days and weeks shows what this means: the airlines have shut down a large part of their fleets. The number of parked Airbus A320 and Boeing 737 models, which were used in large numbers by low-cost airlines, is particularly large.

At this point you will find an external content of Twitter, which complements the article. You can view it with one click and hide it again.

I agree that I may see external content. This allows personal data to be transmitted to third-party platforms.

A few machines intended for passengers are currently in use for freight transport. But for many aircraft, such as the giant A380 jets, it is not clear whether they will ever fly again.

Europe’s jets park at these airports

The industry association IATA expects airline revenues to fall by half this year. In other words, airlines are estimated to be earning ‘314 billion less in ticket sales than last year. And that’s a prognosis that may still be optimistic.

Many airlines such as Ryanair, British Airways, SAS and Icelandair are laying off staff, technology companies such as Boeing, General Electric and Rolls Royce as well. Airbus says it has yet to comment. The company is currently clarifying “what the situation might be in 2020 and 2021,” Airbus CEO Guillaume Faury said in the SPIEGEL interview.

The sector will take several years to digest the crisis, industry officials warn. For some, the outlook is too uncertain: Star investor Warren Buffett has just sold all his stakes in the four largest US airlines.

Many airlines are currently negotiating government support. According to SPIEGEL information, the rescue of Lufthansa by the German state is expected to amount to around ten billion euros in aid. In France, an interesting development is emerging on the issue of aid: Air France is only to receive money from the government if the airline commits itself to strict climate targets. This includes eliminating many domestic flights and reducing emissions on long- and medium-haul routes by 50 percent per passenger per kilometre by 2030.

In this way, the crisis might actually make aviation a little greener. Perhaps not, either, because cramped airlines could delay the purchase of new, fuel-saving jets for a long time. Economist Price says he keeps thinking about what it was like to be on a jet. He now lacks flying a bit.