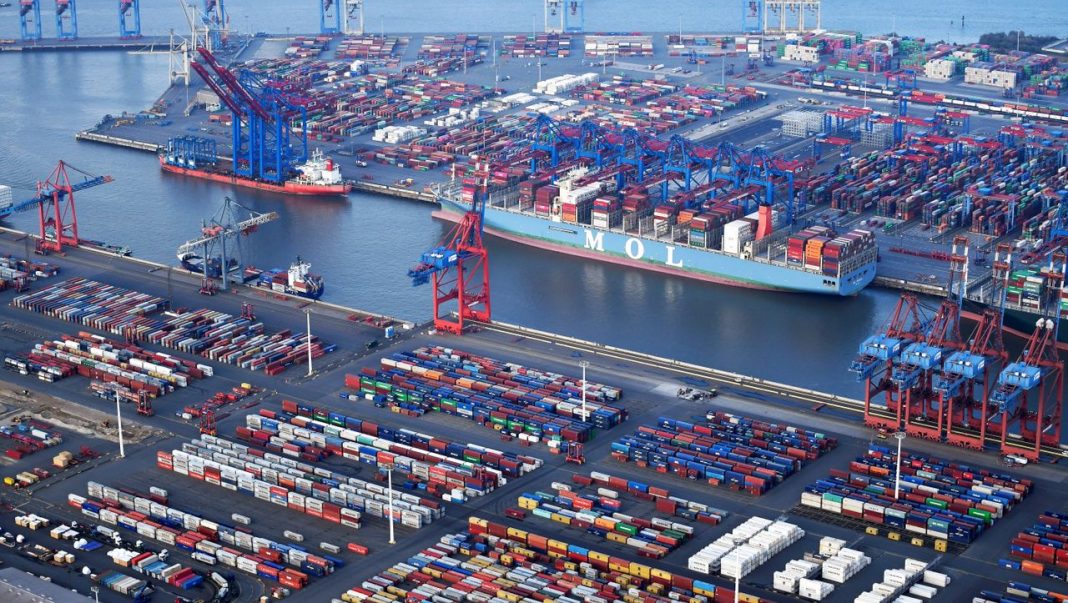 The ups and downs of the global economy are usually felt by the Port of Hamburg with a delay of around six weeks. After an order in the Far East, it takes so long to produce, pack the goods there – and to sail to Europe by container carrier. In recent weeks, business in Hamburg has been running mau: the aftermath of phase one of the Corona pandemic in January and February was to blame. At that time, parts of China were under mass quarantine, countless factories in the People’s Republic were dense, and correspondingly few freighters were deposited to the west.

But the picture in Hamburg could change rapidly: experts fear that containers will soon pile up in Europe’s major ports.

“In the next three or four weeks, a lot of cargo will arrive in Europe – and hardly anyone can use it,” Lars Jensen, head of Copenhagen-era analysis firm Sea Intelligence, told SPIEGEL. “In the terminals, the number of containers that will not be picked up will increase rapidly.” Jensen, once a senior manager at the Danish shipowner group, Mr. M’ller-Mérsk, has been working in the industry for two decades; he knows the mechanisms of business. And these could cause a container jam in Europe’s ports.

From the end of February to the beginning of March, there was an interlude in the Corona crisis: in China, many companies started again. And their European customers, such as large textile and trading houses, still order goods on a large scale. Until a little later their own business was paralyzed: by phase two of the pandemic with the lockdowns in Germany, Italy, France and other states.

“Now the orders arrive here from the end of February – but the importers still have a lot of goods in their warehouses that they haven’t sold in the last few weeks,” Jensen says. “When the warehouses are full, what do I do with another 50 containers? Where do I take that stuff?” There was a great incentive not to pick up the delivery immediately from the port.

The large Hamburg terminal operator HHLA believes a short-term container flood is possible – and is preparing. “In order to meet their supply […] IN the event of traffic jams during the collection of containers in the port of Hamburg, HHLA is currently inspecting areas outside its facilities,” a company spokesperson writes at SPIEGEL’s request. The aim is to allow the containers to pass quickly, but the effects of the pandemic have put a lot of pressure on global supply chains. “In order to avoid the capacity limit of our warehouses at the terminals exceeding the capacity limit and the traffic jams of kilometres on the port roads, we are working out an area concept as a precautionary measure.”

Containers whose contents no one needs

Finding parking spaces for thousands of containers near the port will not be easy. The area must probably be larger than a football field and a stable, solid ground on which the containers weighing tons do not fall in the mud in the rain. Access to individual containers must be possible at any time – and the location is easily accessible for the trucks they are supposed to pick up.

There is also hardly any space left in the intermediate warehouses of the forwarding companies. “The storage capacities of many of our members are on the attack, the trade uses all available space for goods for which there is no use,” says Frank Huster, Chief Executive Officer of the Federal Association of Freight Forwarding and Logistics. “First the flow of goods from Asia is missing, now we get too much,” says Huster. “There are containers in the ports with content that you know you don’t need.” Accordingly, the incentive to pick them up is correspondingly low.

The abundance of clothing and shoes seems to be particularly large. “Textile retail has collapsed, and it is not working well online either,” says Michael Reink, Head of Location and Transport Policy at the German Trade Association (HDE). “The warehouses are full, the shops are full.” In order to accommodate the supply, the HDE is now looking for interim storage facilities in industrial companies for its members.

But fashion products are rapidly losing value. The goods quickly become unsaleable, especially “Fast Fashion” has a problem with its business model of the weekly changing collections: These have to be sold constantly en masse, which was not possible in the week-long lockdown. The result: stacks of clothes in the harbour, in the freight forwarder’s halls, in the warehouses and shops of the brands.

As far as the US oil market – where sellers paid buyers money for a short time last Monday due to lack of storage space for taking the superfluous fabric – the textile industry is unlikely to do so. “It is expected that many retailers will offer discounts,” says Reink of the HDE. He does not say that goods are likely to be destroyed on a large scale. But this was quite common even in the pre-Corona era. No one dares to predict how much the losses will be, how many farms will have to give up.

In any case, German fashion retailers claim to solve the problem of the accumulated goods. “We collect all the textiles in our warehouse and are currently creating the necessary space for this,” says Kik, a textile discounter, on request.

After all, it is foreseeable that the handling in the port of Hamburg will probably quickly abate again after the container glut in the meantime. For the Europeans ordered little from Asia during the lockdowns. And so the large container shipping companies are currently sifting together the pre-determined journeys of their freighters. Since the beginning of the year, the analysts of “Sea Intelligence” have counted 435 such “Blank Sailings”; at least seven million standard 20-foot containers have been shipped less than planned.

This corresponds to more than four percent of the annual global container traffic. And this Corona year is less than four months old.