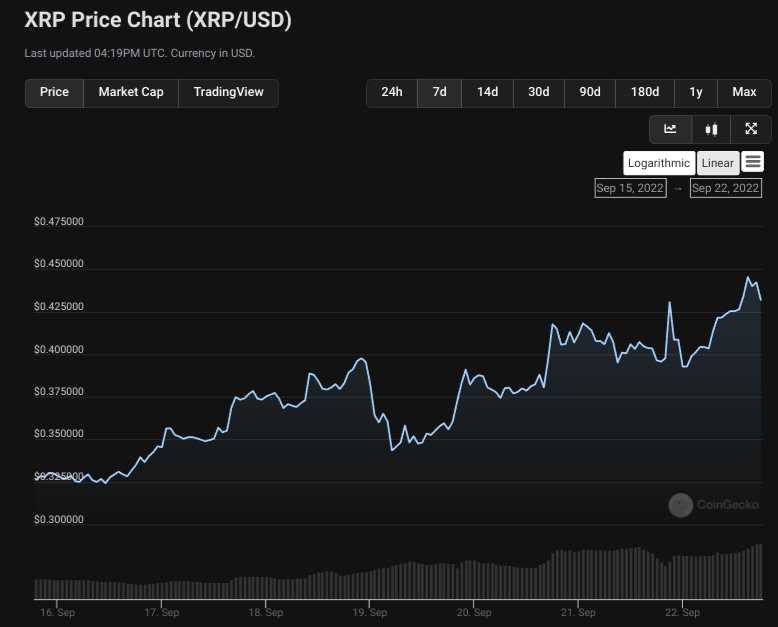 Enthusiasts and speculators are hopeful that the price of Ripple will continue to rise for the foreseeable future. Nothing is ever guaranteed in the financial world. However, Ripple has successfully sparked momentum while other markets struggle to find even footing.

The Price Of Ripple Moves Up

Anyone watching Bitcoin or Ethereum lately will acknowledge the market does not favor much bullish sentiment. Nor is there any reason to be bullish due to problematic macroeconomic conditions and a lack of excitement. Even Ethereum’s Merge- a highly anticipated event for months – was seemingly priced in well before it went live on the network.

The only top market sparking some excitement is XRP. More specifically, the price of Ripple has risen solidly in the past week while other markets continue to struggle. It is not uncommon for alternative markets to see momentum when BTC and ETH are in the dirt, although such runs usually don’t last too long. However, there is a difference, as Ripple remains relevant for various reasons. Those developments might not always influence the price of Ripple, but for now, it is certainly a catalyst.

The price of Ripple went up by over 26% in the past week. That is a significant development that goes beyond mere speculation. Thanks to crucial behind-the-scenes developments, investors and speculators have become bullish on XRP again. Whether they will remain so positive is hard to predict. Moreover, the XRP price is still down by over 50% compared to a year ago.

There has been a range of news capable of affecting the price of Ripple this past week. One of the company’s partners, I-Remit, wants to expand the ongoing partnership to make broader use of On-Demand Liquidity. It is a solid example of Ripple’s role in real-world use cases, as the finance industry is prone to disruption and more efficient solutions. I-Remit has worked with Ripple since 2018 and is one of the earliest adopters of ODL.

Staying relevant is crucial in this competitive industry. While Bitcoin and Ethereum are always relevant, XRP’s role in the real world excites more people than before. That influences the price of Ripple, although it may not necessarily resume its current uptrend for longer. Bucking the overarching negative market trend is tricky for any project, no matter its real-world viability.