eTrendyStock
HomeNewsArgentina faces economic collapse due to coronavirus
News
May 10, 2020 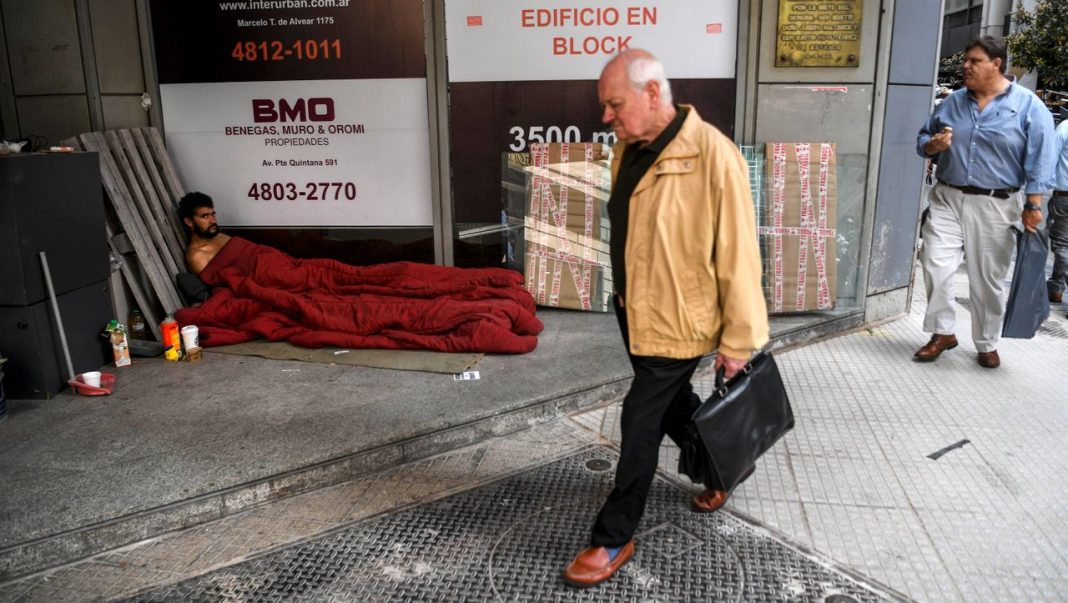 The Corona shock came to Mariana Achaval when her restaurant was doing really well. She had expanded the “Alegra” bistro, which she runs with her partner in Buenos Aires’ trendy Chacarita district, and hired a sommelier and several waiters. “The restaurant is my life project,” says the trained cook.

Then the coronavirus broke her business. On March 20, President Alberto Fernandez imposed some of Latin America’s strictest quarantine measures:

“We were totally taken by surprise,” complains landlady Achaval. “From one day to the next, we were without income.” At least the hard measures seem to serve their purpose. Argentina is better off fighting the virus than many of its neighbours. This success is attributed above all to the President:

Whether this will remain the case, however, is uncertain. For Fernandez must now manage one of the biggest economic crises in Argentine history. Gross domestic product will fall by 5.7 percent as a result of the Corona crisis, the World Monetary Fund estimates. The consequences for gastronomy are particularly dramatic.

Buenos Aires was always famous for its nightlife. No other city in South America has so many cafes and restaurants per square kilometer. In many restaurants you can also order a steak at two in the morning. Now they are threatened with extinction. Tens of thousands of waiters, chefs and restaurant owners are in need.

The government ordered that permanent employees should not be laid off during the Corona crisis. The state pays them a minimum wage. “But that’s not enough to survive,” complains landlady Achaval. Trade unions and entrepreneurs are therefore calling for additional aid for the distressed economy. But the treasuries are empty, and not only since the coronavirus outbreak. In addition to the pandemic, the country is once again facing a debt crisis.

“Argentina was already insolvent in February,” says Professor Ulrich Volz, Director of the SOAS Centre for Sustainable Finance at the University of London. “Now the pandemic has drastically worsened the economic environment.”  Exports, in particular, have slumped. At the same time, spending on dealing with the Corona crisis has risen sharply. Volz says, “The Argentine state has no room to repay the debt.”

The middle class slips into misery due to the Corona crisis

More than a third of Argentines were considered poor even before the Corona Crisis. Now middle-class people are also slipping into misery. Long queues form every morning in front of the soup kitchens of private aid organisations. “To say now that we are serving the foreign debt for the first time would be a political explosive,” Volz says.

The government therefore proposed to the private creditors that debts amounting to 65 billion dollars be restructured:

The deadline for an agreement is 22 May. If debt restructuring is not successful by then, Argentina will declare itself insolvent. It would be the ninth state bankruptcy in history.

No other country has gone bust so often. “When Argentina issued new bonds in 2016, every investor must have been aware of the risk,” says financial expert Volz. He adds: “The capital markets are forgetful.”

Many investors were blinded by the liberal economic course of the then ruling conservative Mauricio Macri – especially since the World Monetary Fund had granted Argentina a new billion-dollar loan. Volz says: “The growth forecasts were far too optimistic.”

“The creditors are jointly responsible”

The consequences must now be swayed by President Fernandez. To revive the economy, he must resolve the debt issue. He has signalled flexibility. “I believe that the government’s offer is a starting point for negotiations,” says Martin Daud of the financial firm Balanz, which trades in Argentine debt, among other things.

Giant investment funds such as Blackrock, Fidelity and T Rowe hold most of Argentina’s private debt. Daud sees this as an advantage compared to the 2001 crash, when obscure vulture funds tried to claim Argentine state assets such as ships and planes. “The mega-funds are under enormous public pressure,” says Daud. The creditors “share responsibility for the Argentine debt crisis and should participate in a solution,” demands financial expert Volz.

The funds have so far rejected the government’s offer, but that does not have to be the last word. For another state bankruptcy would be a fanatic for the whole world. “If the health crisis continues to worsen, many countries will find themselves in a similar situation to Argentina,” Volz says. “We need an international legal framework for the restructuring of sovereign debt.”

President Fernandez, meanwhile, has signalled a relaxation of the strict quarantine measures to alleviate the economic crisis. It is not yet clear when restaurant owner Achaval will be allowed to reopen, but she now has hope – a bit.