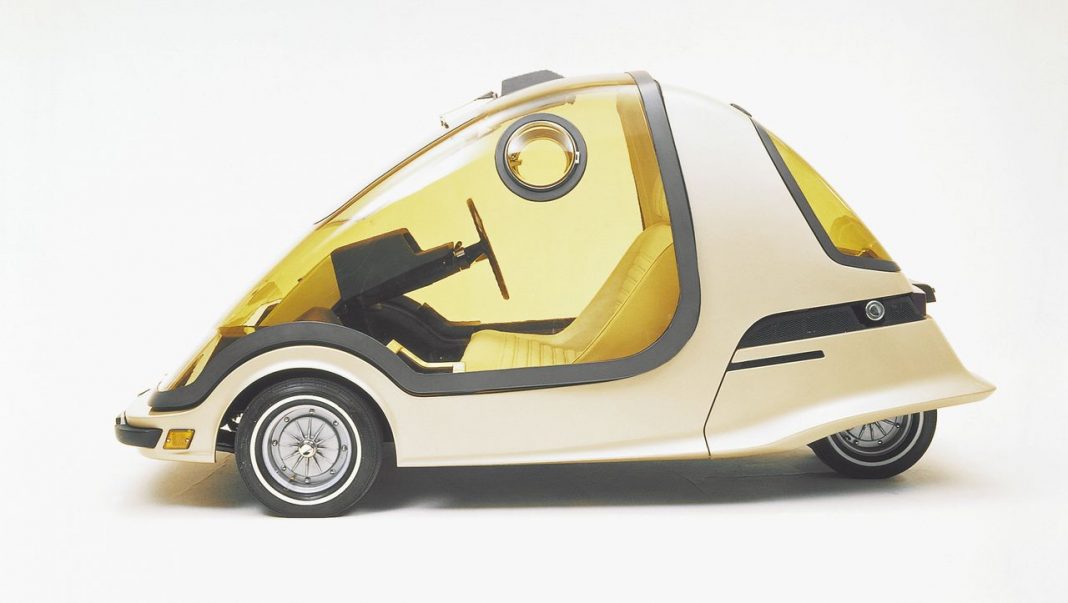 What does the ideal big city vehicle look like? This issue was discussed just over fifty years ago. And Toyota presented an answer at the Tokyo Motor Show that is still relevant today: the EX-II electric vehicle. A small, agile, exhaust-free two-seater that comes into virtually any parking space.

Even then, problems were acute and still dominate the debates on mobility. Increasingly congested roads in major cities and harmful air pollution – not least because of the large number of cars. This led to the introduction of emission standards in Japan as early as the mid-1960s. Automakers responded: Toyota, for example, hired market researchers to investigate Japanese road traffic in more detail. It turned out that more than 75 percent of cars in Japan were used exclusively for commuting between home and work. In addition, the researchers’ data showed that a maximum of two people were in the cars.

The engineers in the development department drew the obvious conclusion from these results: they designed for the Tokyo Motor Show of 1969 an electric car with only three wheels designed for short distances, which offered space for two, was simply equipped and as scarce as possible: the Toyota EX-II.

A prototype in three variants

In fact, it was even electric triplets that Toyota unveiled at the time. The EX-II was presented in three variants. The minimobile was designed for use as a commuter vehicle (Type A), as a luggage transporter, for example, for hotels (Type B) or as airy wagons for leisure use (Type C). In the standard model for everyday traffic to the workplace and back, the car carried a large, curved dome made of plexiglass. It could be folded completely to the rear, so that one could get into the car like an open shell.

Viewed from the side, the EX-II Type A looked a bit like an oversized egg cooker. Two portholes embedded in the dome could be opened if necessary. Unusual was the positioning of the headlights, which were mounted in front of the feet of the occupants in the interior and glowed through the transparent dome to the outside. The interior was very clearly furnished. A continuous bench was upholstered differently depending on the model variant and was equipped with headrests and pelvic belts. There was also a steering wheel and a shift lever – ready.

In the type B and C variants, the closed dome was dispensed with. However, the luggage trolley was given a small platform for cargo at the front and also a trailer at the rear. The version intended for leisure use got the look of a futuristic golf cart thanks to a luggage rack attached to the rear and a keck curved roof over the occupants. Technical details of the e-weighing are no longer known, and toyota no longer has any documentation available. The fate of the EX-II prototypes is also unknown.

However, the basic idea for a minimalist city car, which is precisely tailored to the needs of commuters, found several imitators. Four years later, for example, at the Paris Motor Show, stood the mini-car Minima, a two-seater designed to de-escalate the already chronically chaotic traffic in France’s metropolis. And in 1981, Mercedes launched a two-seater: the Nafa research car, a grotesque-looking ancestor of the Smart City Coupé. But the Toyota EX-II had one thing ahead of these two ideal descendants – and even later even the Smart: The Toyota crunch was to be driven purely electrically from the beginning.

Although the EX-II did not go beyond the prototype stage at the time, it changed Toyota’s thinking about the automotive of the future. According to the company archives, the car was the starting point for the search for the ideal, low-emission drive for urban traffic. From this point of view, the EX-II was even the original ancestor of the Prius hybrid model, which was introduced in 1997. And the ultra-compact Toyota i-Road, unveiled in 2013, also has no denying technical and optical parallels: the i-Road also has three wheels, two seats and drives electrically. The narrow-gauge e-mobile is expected to arrive in Germany in small quantities later this year.

The Return of the Original Idea

And last year, exactly 50 years after the EX-II premiere, history was repeated at the Tokyo Motor Show. Toyota again showed an electric two-seater. The ultra-compact car, previously simply called BEV, is not supposed to remain a one-off, but will roll off tape in Japan later this year. It would then be Toyota’s first large-scale electric car. A city mobile for commuters, in the tradition of EX-II.